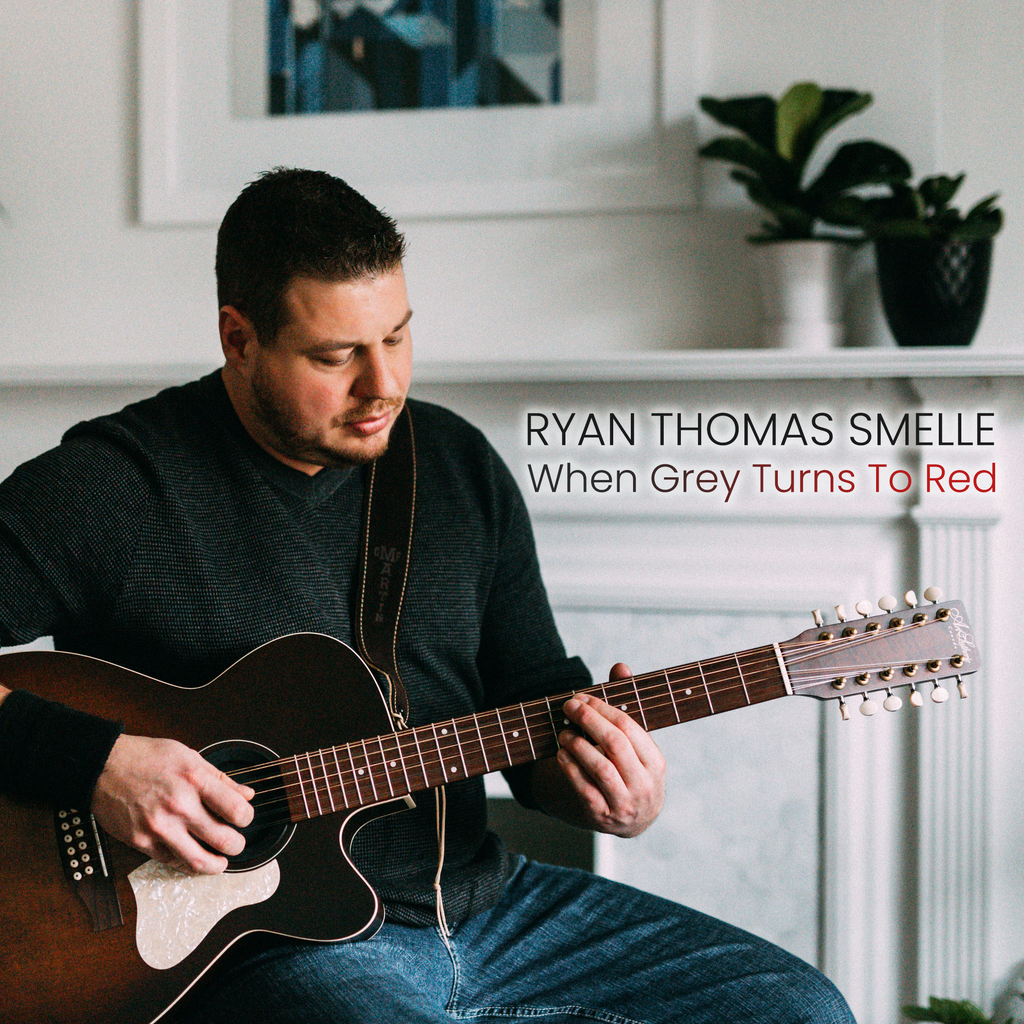 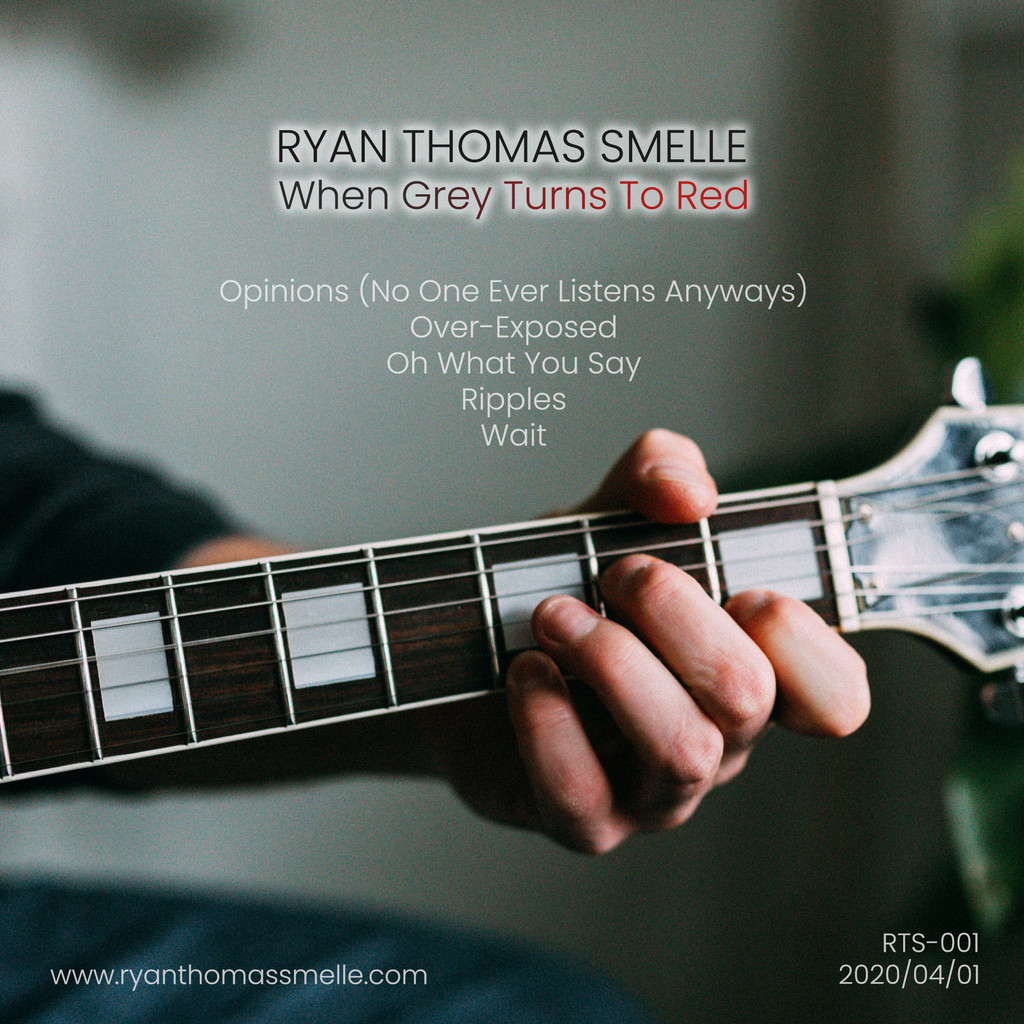 Stream above or download “When Grey Turns To Red” HERE.

This EP started as 3 songs but has grown to the 5 track album you see before you. The first 3 songs are from 3 years of my life that tell a very specific narrative around my families journey and my own mental health. It then occurred to me that I should include ‘Ripples’ & ‘Wait’ as they were also created during this time and do connect with the albums theme. These are also the first 5 songs I’ve done completely myself. This is in regards to the recording and the production of them. The songs are rough, bare bones and laced with simplicity. I used only myself, a guitar and my iPad to record all 5 tracks. There are many imperfections and background noises but somehow this makes them more authentic to the story I was trying to portray. I found it difficult at first to open and expose the rawness of my feelings in this way but have embraced my experiences and am very proud of the end result. It has taken many years for me to realize that being a good songwriter is more than just writing words to some chords and is more the art of telling a story. These songs use my life during a roller coaster time as their muse and I hope you can connect, feel and enjoy them for what they are and where they may take you.

Opinions (No One Ever Listens Anyways)
I have NO recollection of writing or recording this song and know it was created during the period of time between the birth of my 2 daughters. It clearly indicates my feelings at the time about how I felt as a song writer.

Over-Exposed
Written at a time when things seemed so out of my control that something needed to give.

Oh What You Say
Includes the voices of both my son and daughter and was written at the end of a long tumultuous time. This end was also the start of a new beginning.

Ripples
This song is unlike any other I’ve written and it took a long period of time before I was able to put my feelings into song. It is quite emotional in it’s meaning and intent. I’ll leave it for you to interpret and hope it touches your heart as it did mine while I was creating it.

Many close friends and acquaintances have become fallen angels too soon.

The wonder of this song is that it was created effortlessly over 3 days on a Balsam Lake dock. The first day it was written, recorded the next day on the dock (hence the sound of nature – but it works) and then the videos sunset was filmed on the third day.

Wait
I adore the simplicity of this track, the catchy riff and the hooky lyrical measure.

The concept of the song hinges around two lyric lines and a manipulated spoken vocal sentence. The feeling of having enough of this life is the dilemma. There is only two solutions in this scenario, leave this world or continue to be a slave to it. The hooky riff is a juxtaposition of this actual feeling making the song sound happy and whimsical instead.

In the video, the bridge and the figure represent the two choices. We don’t know if the figure just crossed or is about to cross the bridge. There is an elusion to this figure just crossing the bridge by panning the picture upwards for the whole minute transcending toward heaven and there is a shadowy cross in the upper left corner by the figure. However this can be interpreted in directly the opposite manner as well. The video could be showing where the figure is going to end up at the start all along. Up to the audience to decide.

The final ‘No – Wait’ sounds as if the wrong decision has been made in the end. This would be indicated by an interrobang after each of these words (‘No!? Wait!?!?’). The other ‘Wait.’ words are just statements as the figure is making a decision.

Thanks to D. Judd (a side project of mine titled The Rundown) for contributing his line for me to play with in this recording. This song is an artsy one for me in regards to how I produced the song and created a single image video for it. It is very unlike anything I’ve done before as it is quite simple. I hope it makes you think.

Stream the 5 Video Playlist Below

All 5 songs from “When Grey Turns To Red” have videos.

Opinions, Over-Exposed & Oh What You Say were released for my b-day December 9th, 2019 as a three part series. All songs are directly connected in telling a personal narrative, but differ vastly in their lyrical format and presentation which lends nicely to my emotional feelings attached with each.

Ripples was written, recorded, and the video was shot/edited on a Balsam Lake Dock over 3 days in July 2018. Video was released on August 2nd, 2018

On the jumbotron! Nice! 8 to 11pm. #lundyslanenf

New Song Release! The story behind the music: As

When this happens, it's usually because the owner only shared it with a small group of people, changed who can see it or it's been deleted.
View on Facebook
· Share

From the Strait @fromthestrait ·
31 Jan

Singer-songwriter @RyanSmelle has just released his debut album, In The Homestretch, featuring single, "Novel Study". We caught up with Ryan to chat about the new song, how he first became a musician, and his favourite Niagara bands and artists.

Well it’s HERE! My first full length SOLO album will be out December 9th. Visit my website to pre-order your digital copy now.